I had to debug my USRobotics router recently (a good old USR9108) as it ceased to respond completely to any network traffic. The CFE was working fine (192.168.1.1 could be pinged), so I thought a tftp firmware flash would do the trick, but to no avail (I got timeouts all the time). Accessing the serial console seemed to be the only way left, so I had to practise some PCB soldering the hard way.

A good tutorial would have been really reassuring at the moment. There’s a lot of material on Linksys routers (due to its OpenWrt popularity), but I couldn’t find much about USR9108, so I had to pick and guess the proper pinout. Now I know, doing it with a properly working multimeter (mine is probably appropriate for battery testing only) would have been much easier.

The USR9108 has a 4-pin pad next to the Broadcom BCM6348 CPU. It’s 3.3V transistor-transistor logic (TTL), so a special USB converter (or some reworked USB Nokia data cable) is a must (mine is FT232R based, and works flawlessly). The proper connection sequence is TX, RX, NC, GND as seen below: 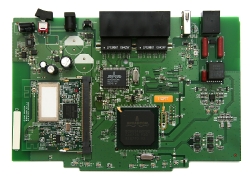 Router’s TX and RX have to be connected with RX and TX on the PC side correspondingly, and GND with GND (it’s data/signal ground, so just grounding it is not the best idea). Connection settings which worked in my case are as follows:

I was having some problems with RealTerm (though I don’t know why), but PuTTy worked a treat.

More technical details about the router can be found in the OpenWrt wiki.